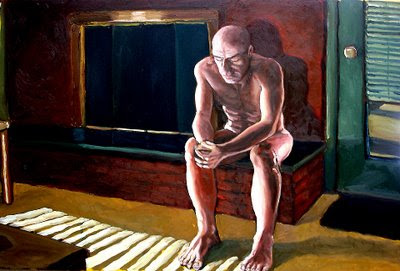 For the past year I have concentrated on canvases that utilized architectural themes, with an emphasis on light. However, I have at times completed works that incorporate the human figure.

This painting, entitled "3 A.M.," was completed in 2007. At the time this canvas was produced, I was going through a great deal of change in my professional life. The idea came to me after having spent a sleepless night thinking about work and its challenges. The setting was a room in my own home. For the figure, I posed myself and then took a series of self-timed digital camera shots. From these I produced a charcoal sketch, and then used the drawing as a basis for the final work. This piece was shown in the July-August 2007 exhibition "Anything Goes" at the Kirk Adam Gallery in Raleigh.

http://www.kennetheugenepeters.com/3_AM_Painting.html
Posted by Kenneth Eugene Peters at 6:56 AM