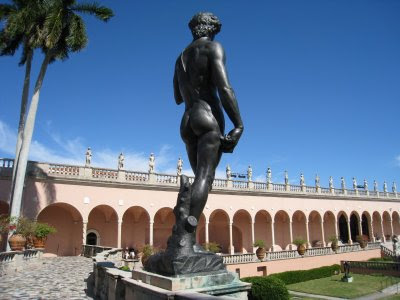 In November I had the opportunity to visit the John & Mable Ringling Museum of Art in Sarasota, Florida. I had long wanted to do so in order to tour the Ringling's legendary winter home, Ca d'Zan, which is also located on the 20-acre site. However, in addition to the splendor offered by Ca d'Zan, I was impressed with the sumptuous art museum built by John Ringling in the 1930s adjacent to his home.

Ca d'Zan, the Ringling's winter home, was constructed in the mid 1920s. It is styled after a Venetian palace and includes original furnishings and art from the Ringling era. John Ringling was one of the five Ringling Brothers, circus kings of the late 19th and early 20th century who were so successful they eventually purchased the Barnum & Bailey Circus to create a combined act billed as "The Greatest Show on Earth." Two circus museums are also on the grounds, one holding a large collection of artifacts from the Ringling Brothers-Barnum & Bailey Circus, and the other containing a huge scale model of the circus in its heyday during the 1910s.

I enjoyed a memorable day-long visit at the Ringling along the shore of Sarasota Bay, and I highly recommend it as a destination for other art, architecture or circus lovers. For more information, visit http://www.ringling.org/.
Posted by Kenneth Eugene Peters at 5:49 PM