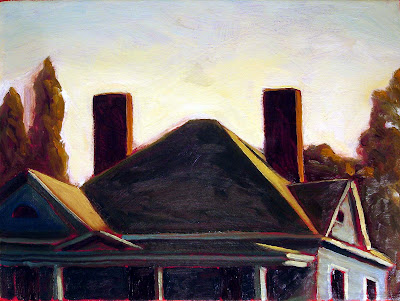 This small canvas was the fourth painting I completed based on the Cary farmhouse that is located on Holly Springs Road (about five miles from my home). I decided to focus on the rooftop of the house with this work, since it has so many interesting angles created by the multiple gables.

I first covered the canvas in a cadmium red acrylic base as an underpainting. On top of that I roughly sketched my composition in burnt sienna oil paint. Then, I painted the rest of image, working in a loose and rapid manner. The entire painting was finished in a two-hour time frame. 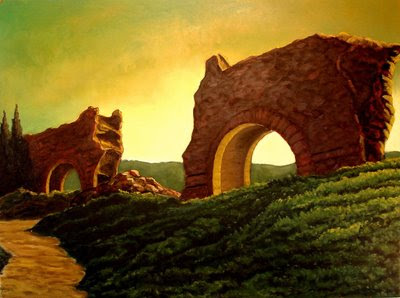 This painting was another in the small series of canvases I completed in 2007 based on imagery seen during a trip to France two years previous. Considered a companion piece to the painting "Twilight at Glanum" (see previous post), the work depicts another Roman ruin, the ancient aqueduct at Barbegal.

Thought to have been constructed in the 1st century AD, these ruins were part of a water system linked to a large flour mill complex located about 7.5 miles north of Arles. The aqueduct funneled water from the Alpilles Mountains to an expansive and fertile valley region that served as the bread-basket for Arles, then an important Roman city called Arelate. (For more information on this system, visit http://www.waterhistory.org/histories/barbegal/).

My traveling companions and I chanced upon the site while driving north from Arles on our way to Glanum and Saint-Remy-de-Provence. A small road marker indicated the turnoff to the aqueduct, and after following a winding country road a few kilometers, the ruins appeared on the right. The site is remote, unrestored and rises in the middle of existing farmlands. An overgrown dirt path, free of interpretive markers of any kind, hugs the stone wall of arches until it ends at a drop-off that overlooks the valley below.

For the painting, I chose to depict the ruins in a Romantic vein with an improvised sky filled with dramatic lighting indicative of sunset. I made some subtle changes to the architecture of the ruins to heighten the atmosphere, but for the most part the painting is a faithful depiction of the complex. Like "Twilight at Glanum," this canvas will be included in my upcoming solo exhibition at the Jordan Hall Arts Center in April 2009.

"Aqueduct Ruins." Oil on stretched canvas, 30 x 40 inches. Completed in October 2007.
Posted by Kenneth Eugene Peters at 8:43 AM No comments: 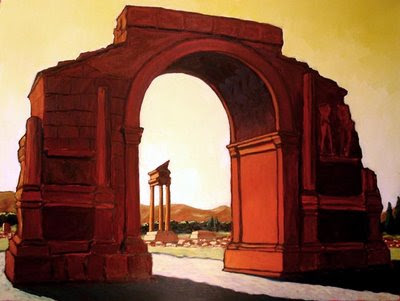 Two years ago I did a short series of canvases based on sites I visited during an October 2005 trip to the south of France. One of these sites was the Roman ruins of Glanum, an ancient city that once thrived just south of present-day Saint-Remy-de-Provence.

The Glanum site may date back to 1,000 BC, and existed prior to its later occupation by the Greeks and then the Romans. Roman rule began in approximately 100 BC and continued until 260 AD when it was destroyed by the Alamanni tribe of Germanic descent. The most striking feature to survive today is the triumphal arch constructed between 10 and 25 AD. Nearby is a towering cenotaph dedicated to Sextius, Marcus and Lucius Julius, the sons of Gaius. (More information on this area is available at http://www.saintremy-de-provence.com/anglais/cculture.htm).
During his stay in Arles and Saint-Remy from 1888 to 1890, Vincent Van Gogh painted in the Glanum area. In fact, the Van Gogh painting entitled "The Olive Trees" (1889) depicts the rocky bluffs that can be seen today overlooking the excavated site at Glanum.

For my canvas, I relied on photographs taken during my afternoon visit to the site. The final composition is a combination of several images I captured that day, and the setting sunlight and distant mountains were created from imagination and memory.
In August 2007 this painting was juried into the Flanders Art Gallery's Regional Art Exhibition by juror Bill Thelen. It will also be featured in my upcoming solo exhibition "Structure and Light" at the Jordan Hall Arts Center (Cary NC) in April of this year.
"Twilight at Glanum." Oil on stretched canvas, 30 x 40 inches, completed July 2007.
Posted by Kenneth Eugene Peters at 8:36 AM No comments: