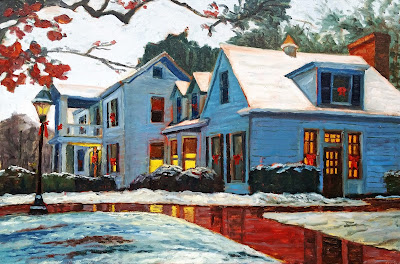 This is a painting I completed in October depicting the main farmhouse at Historic Oak View County Park here in Raleigh NC. It seems a most appropriate image to use as my holiday greeting to family, friends and patrons. Wishing you a Merry Christmas and a very Happy New Year 2016!

The Winter Show at Greenhill 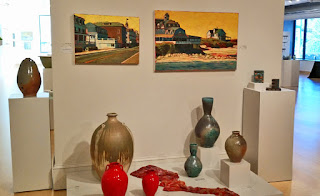 Last Sunday the Gallery at Greenhill in Greensboro, NC opened its annual Winter Show to the public, after having held a Collector's Choice gala fundraiser in the exhibit the night before. This year I was one of 120 North Carolina artists invited to exhibit work in the show, a great honor for me. I chose to include "Looking North on Water Street" (above painting on the left) and "On the Beach" (above painting on the right), two works completed as part of my Block Island series of 2013-2014.  I visited the show this past Tuesday and learned that "On the Beach" had sold at the gala. The exhibition will continue through January 15, 2016. The Gallery at Greenhill is located at 200 North Davie Street in Downtown Greensboro (http://www.greenhillnc.org).
Posted by Kenneth Eugene Peters at 3:04 PM No comments: