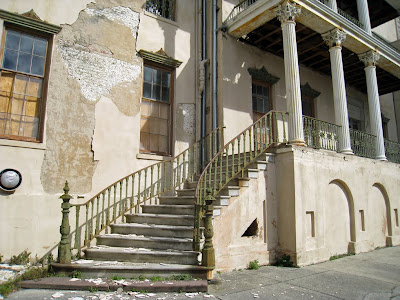 It's time for my annual sojourn to Savannah, Georgia - my favorite city in America. The weather, which has been unseasonably cold for months, is supposed to cooperate with highs in the low 60s and sunny skies. I confess that I look forward to the food as much as the architecture when I travel to the Hostess City of the South. There is no place on the planet like Savannah.

Pictured above: The ruins of the old Candler Hospital, located on East Huntingdon Street.
Posted by Kenneth Eugene Peters at 6:07 PM No comments:

Homage: Mansions by the Sea 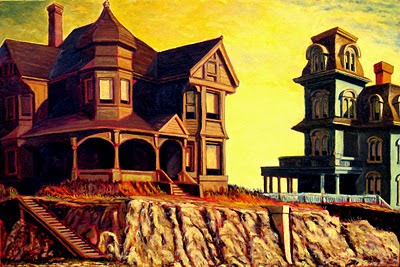 For the past few weeks I've been working on a series of night studies depicting urban scenes based on my many visits to Savannah, Georgia. The canvases are small (ranging in size from 9x12 to 12x16 inches) and have been quickly composed and executed. I'll present some images in future posts.

This work is a large canvas that I began in August 2010 and completed this month. It was to be the last large-scale piece I worked on prior to the ill-fated Somerhill Gallery show planned for October 2010. When I learned in August that the exhibit would be canceled, I ceased working on the painting, only to return to it immediately after the Christmas holiday.

The mansion depicted on the left was based on a photograph I found on the Internet; the one to the right is inspired from a famous work by an artist I admire. I decided to combine the two structures on an imagined bluff overlooking a sea. This work has been a struggle to produce and went through several iterations before I settled on this composition. In fact, I had painted in a different structure on the right only to paint it out a few weeks later. 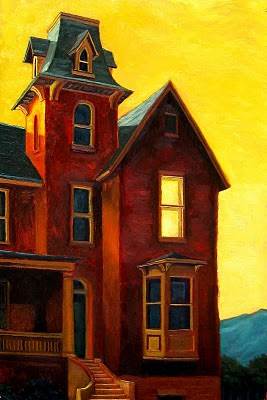 Another canvas inspired by architecture in Cumberland, Maryland, this piece was featured in my recent show at the Lee Hansley Gallery in Raleigh, NC. I loved the turret on this particular house, and wanted to create a painting that focused on that feature. 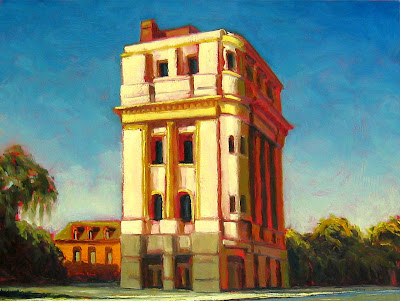 This week's featured work is a "remake" of sorts. In May 2006 I completed a canvas I titled "Urban Sunset." The 36x24-inch painting was based on the Scottish Rite Temple located on Bull Street in Savannah, Georgia. The temple is one of my favorite structures in Savannah, and I have featured a photo of the building previously on this blog.

In June 2010 I decided to complete a second attempt of the subject. This time I used a much smaller canvas and oriented the composition horizontally instead of vertically. I also stylized the setting and eliminated most of the actual surroundings in order to focus on the structure itself. This was the result.