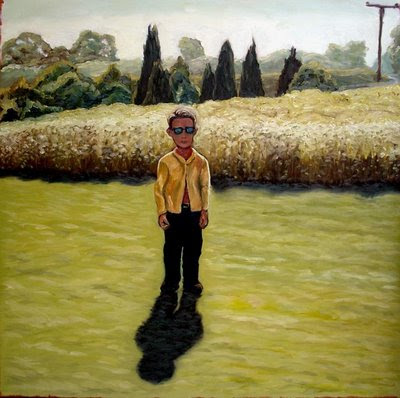 The painting above is another example of recent figurative work I've produced, in addition to the focus on architectural subjects. The source for this canvas was a small black-and-white family snapshot taken of me as a child in 1963. I kept much of the background just as it was in the photo, but made changes to the figure.

A self-portrait in one sense, the painting also served as a conduit to memories from my childhood. The house where we lived at the time the photo was taken hosted many of my earliest memories. We moved away from it when I was six-years-old, so I only have blurred images of my time there. Frankly, most of those memories are now based on the handful of photographic evidence that remains from that time frame. I'm intrigued by the idea of exploring childhood memories through paintings, and may return to this subject matter again some day.