Sunlight on a Pink Sofa 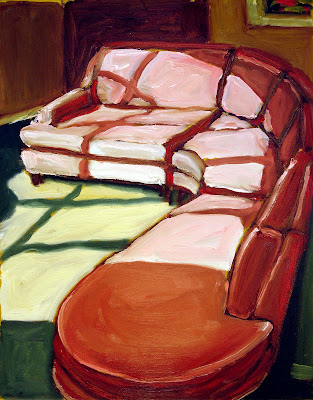 Periodically I will use the interior of my home as a source for new work. In 2007 I did a short series of small paintings depicting the large bay window in my living room and the lighting effect that is created by sunlight streaming through it. This canvas is one of those works.

The sofa seen in the painting is a large Hollywood-style sectional sofa that I purchased at an antique shop in Raleigh. At the time it was dilapidated and covered in a badly stained yellow-and-green oriental-themed fabric. However, the bones of the sofa were solid and a reupholstery job was all that was needed to bring it back to life.

The bay window is the most prominent architectural detail on the front of my house. It opens to a southern exposure, and the shadows created by the ever-present sunlight form intriguing shapes throughout the day. Another canvas produced in this series, "House at Dusk," shows the window in the evening when the street lights outside produce eerie shadows that create an almost menacing atmosphere within the room.

This painting will be featured in my solo exhibition "Structure and Light" which will be on display in the Jordan Hall Arts Center, Cary NC from March 31 to April 30, 2009.