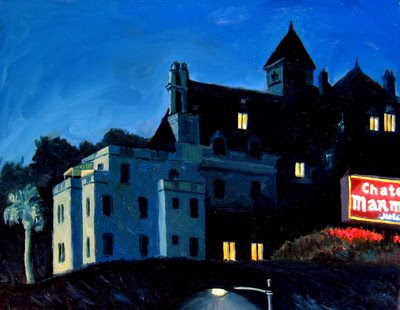 Since returning from a vacation to California last September, I've completed two versions of the famed Sunset Strip hotel, the Chateau Marmont. The Marmont was located just a few blocks east of my host hotel along the Strip, so I walked by it frequently while visiting Hollywood. Its towering, fortress-like facade fascinated me every time I strolled by, and I took many photographs of it.

Opening in 1929, the hotel has hosted Hollywood royalty from its inception. It was a favorite hideaway for Greta Garbo, and Jean Harlow honeymooned at the Marmont. Perhaps its most infamous story surrounds "Saturday Night Live" actor-comedian John Belushi, who was found dead from a drug overdose in one of the Marmont's guest bungalows in 1982.

When I returned home from my trip, I decided to complete a small study of the hotel based on some of the photos I took while in California. The painting above was the result. I wanted to capture the hotel's mystery and allure in this canvas, so I chose a dark night scene. The complex sits high above Sunset Boulevard, and is especially intriguing at night. Having completed the small study, I decided to do a much larger version (30" x 24") a few weeks later. Unfortunately, the second work doesn't capture the Marmont's unique atmosphere as well as the small study did, and feels heavy and stilted. I will likely paint over that version at some point, but the small study is a personal favorite of mine.

For more information on the Chateau Marmont, visit http://www.chateaumarmont.com/ or http://en.wikipedia.org/wiki/Chateau_Marmont.