Song of the Hurricane 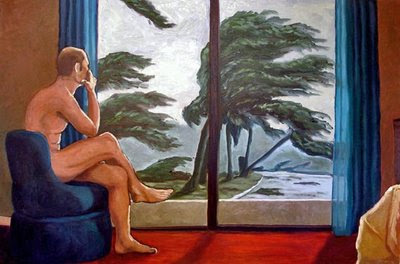 This week I am featuring another figurative work on the blog. Entitled "Song of the Hurricane," the painting depicts a scene developed from my imagination, but also inspired by music.

While listening to the Rodney Crowell album "The Houston Kid" one day, the idea for this composition came to me during his rendition of the song "Telephone Road." I let the idea ruminate for several months before beginning the canvas. Using myself as a model, I combined a self-portrait sketch with a composition based on a photo I found on the Internet of Hurricane Wilma hitting south Florida in 2005. The plate-glass window was improvised, but the curtains and furniture are based on pieces I have in my own home.

"Song of the Hurricane." Oil on stretched canvas, 24 x 36 inches. Completed September 2007.
Posted by Kenneth Eugene Peters at 9:35 AM