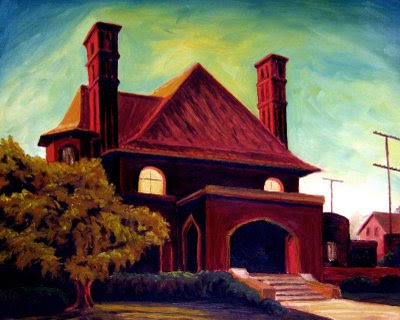 The architecture of Columbus, Ohio also inspired this painting. It is based on a mansion in that city's Victorian Village neighborhood that is known as "The Circus House." I toured the home back in the 1990s during a Victorian Village home tour. It was constructed in the 1890s by a circus entrepreneur named Peter Sells, thus the name. Its unusual design gave it an eerie sense of forboding that I found appealing.

http://www.kennetheugenepeters.com/The_Circus_House_Painting.html
Posted by Kenneth Eugene Peters at 5:55 AM