Back in the studio: Pentimento (The Fabius Briggs House) 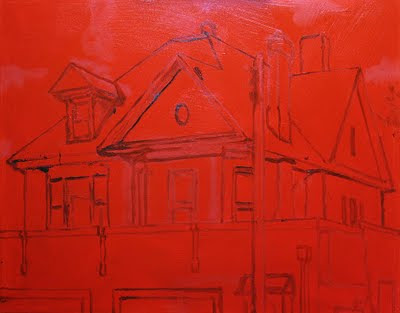 After a four month hiatus, I returned to painting this past weekend. When I put down the brushes at the end of February, I had no intention of staying away this long. March was filled with house guests, then April brought the garden season (and a newly-sodded front yard), travel in May and June, more guests...well, it turned into a longer break than I intended.

My first post-sabbatical work is one based on a house in Raleigh with a sad story. Built sometime between 1900 and 1915, the Fabius Briggs House on Hillsborough Street once hosted a family steeped in local history (here's a blog with the full story). Unfortunately, by the 1950s it had turned into commercial property and then suffered the ultimate indignity of having a linear one-story store front added around it. Now, after decades of neglect, it appears that the structure will be demolished unless a rescuer (i.e. someone with a big heart and a bigger wallet), comes along to rescue it.

I discovered the house about two years ago, and decided then to paint it. Since then I have photographed it several times, but it wasn't until last week that I finally decided to make it my next canvas.

What you see here is the freshly completed underdrawing on top of the red acrylic-primed canvas. From this point, I then worked on it for another five hours. The painting is now essentially complete and, after I strategically place a few highlights on it after the existing oil paint dries, I will photograph the final product and post it to this blog.