FROM THE ARCHIVES: Buick Century 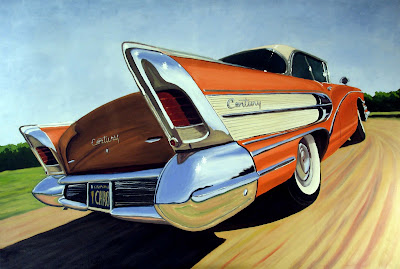 With the coming of summer and its accompanying heat, my painting sabbatical will officially end next weekend. I have taken a few months off, first to work heavily in my flower gardens and yard, but also to pause and consider where I am as a visual artist. Most importantly, I've been thinking about what I want to do next as a painter.

For this week's post I've reached way back in my painting archive to my college years. This canvas, "Buick Century," was created as part of an assignment in my senior painting class at the University of Maryland. The task assigned was to complete a work based on a reflection of some type. While several classmates completed self-portraits posed in mirrors, I chose to focus on the reflective chrome surface of a 1950s American automobile.

The image was based on a photograph from an old car book I owned. I created a pencil grid on the gessoed canvas and used that to help me establish the striking visual perspective of the car. I constructed the canvas frame myself and, remarkably, this painting remains the largest single canvas I have ever completed. I did not fully finish the work in class, and for many years it sat incomplete in my studio storage area. In the 1990s I was again motivated to work on it, and finally completed the piece. I've found over the years that its subject matter and photo-realistic style are real crowd-pleasers.