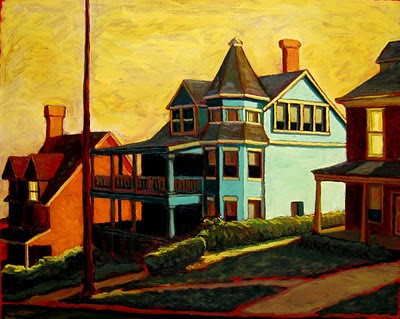 For the next several weeks I will be featuring canvases that will be on display in the upcoming exhibit "home/journeys" at the Miriam Preston Block Gallery. I'll focus on works that have not appeared on my web site and have never been exhibited publicly.

This painting, "The Blue House," was completed in February 2009. It is another canvas in the series I developed last year based on houses and street scenes from Cumberland, Maryland. I visited Cumberland over the Christmas Holiday in 2008, and found a wealth of source material for paintings. To date I have completed eight canvases based on Cumberland imagery. Many of these pieces will be displayed in the "home/journeys" exhibition.