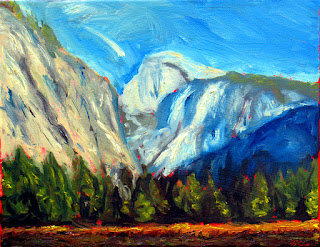 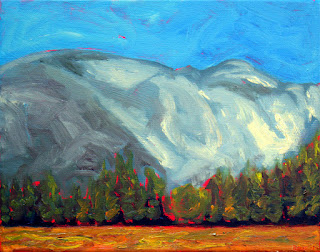 After a fairly unproductive summer in the studio, I've been re-energized this fall, and I'm currently working on several projects.  I began a commissioned house portrait this month, have continued working on architecturally-themed pieces, and started a new discipline of working in the studio at night for experimentation and fun.  For the coming weeks I have marked off Tuesday and Thursday nights as committed studio time, no ands, ifs or buts.  My intent is not to produce gallery-quality works, but to explore new ideas and take some risks I normally wouldn't allow myself during my weekend studio sessions.

I began the idea by assigning myself a project: take an image and reproduce it in oil UPSIDE DOWN.  I chose to use images I took during my Yosemite vacation in 2010 since landscape has not been an area of concentration for me lately.  I placed the source image upside down on foam-board nearby, then painted what I saw on an 11x14 canvas, using no preliminary sketch. I worked for about an hour on each canvas, never turning it over to see the upright image until it was finished. On Tuesday night I completed two small pieces (seen above), and on Thursday night I completed two more (to be posted soon).