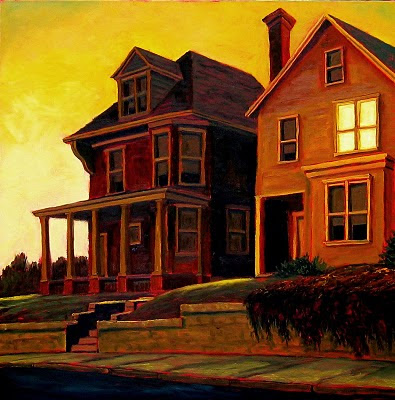 Although entitled "Midwestern Sunset," this canvas is actually based on two houses I photographed in Cumberland, Maryland back in December 2008. Yet another in that series of works, I settled on the title after the piece was completed. The atmosphere in the work was reminiscent of neighborhoods -- and sunsets -- I experienced while living in Columbus, Ohio. So, I decided to utilize a title that evoked that feeling.

This weekend I will begin a new commissioned painting, a portrait of the Third Morgan County (WV) Courthouse that was destroyed by fire in 2006. A new courthouse will open later this month, and I am fortunate to have been chosen to create an official portrait for the lost structure. The painting will become a permanent installation in the new facility.