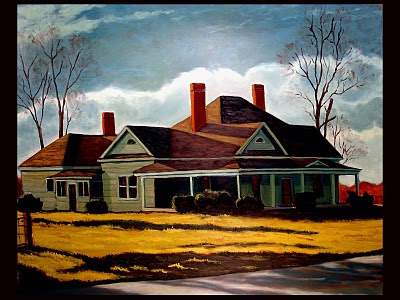 Due to some challenges on the home front, I've been absent from the blog for two weeks. Sadly, one of the challenges was the loss of a beloved pet (my cat, Esther). The other, ironically, was the adoption of a new pet - a 12-week-old puppy - that occurred just prior to Esther falling ill. So, it's been a period of transition in my household.

I have managed to be productive in the studio despite the turmoil. Two weeks ago I returned to the large canvas entitled "Main Street" that I began in late summer as a long-term commissioned piece for a family member.
Posted by Kenneth Eugene Peters at 9:51 AM