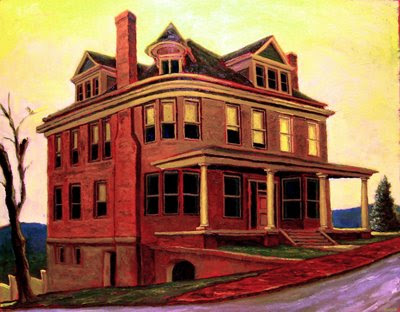 In early January of this year I began a series of canvases based on houses and streets in Cumberland, Maryland. My parents live in the panhandle of West Virginia, and during my Christmas visit I drove to Cumberland to do my own walking tour of its historic district. I strolled up and down Washington Street, taking photographs and making mental notes on the architecture and atmosphere of this old railroad town.

To date I have completed six paintings based on my visit to Cumberland, this canvas being the first. It depicts one of the many large brick homes built in the late 1880s and '90s when Cumberland was a wealthy industrial center for Western Maryland. Today the city is struggling to hold its own, but - thanks to its relative proximity to Baltimore and Washington - many of its ornate Victorian houses have been restored and are now used as either second residences or B&Bs.