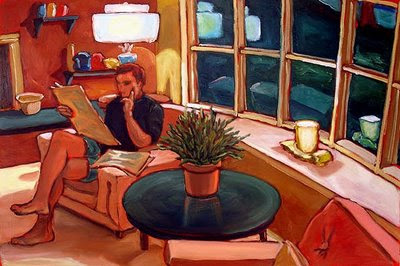 This painting was the largest canvas I completed during the 2007 series of works based on my living room. Entitled "Edge of Night," I again depicted the large bay window that stretches more than eight feet along the southern wall of the room. I chose to depict it at night, relying on interior lighting this time instead of flooding sunlight. I especially enjoyed the multiple reflections created in the window by the hat-box lamp behind the figure. This painting is among the nine currently on display in my show at the Jordan Hall Arts Center.